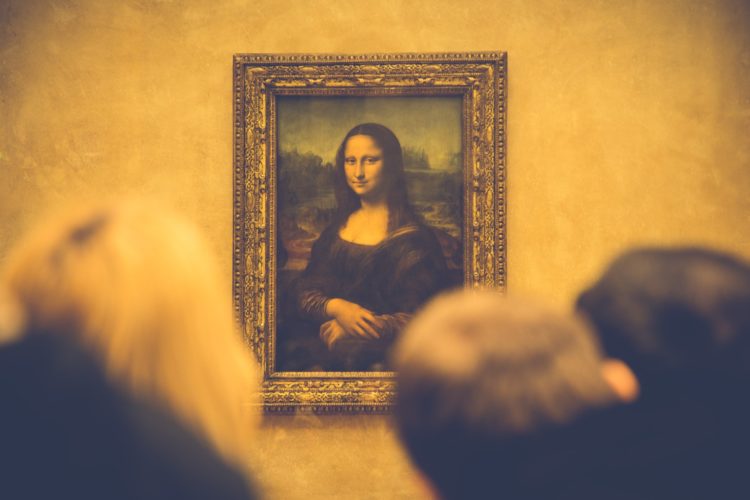 Of all the great paintings of the Italian polymath Leonardo da Vinci (15 April 1452 – 2 May 1519), apart from the ‘last supper of Jesus Christ’, ‘Mona Lisa’ stands out. The painting is the most most talked about among the gallery goers. It is readily recognizable and catches the visitor’s eyes right away.

Since 1804, the iconic oil painting has been housed at the Louvre in Paris. Millions hang around each year to snap a a picture with the lady on the canvas. I had the opportunity to snap one too, of the 500 years old mesmerizing feature on the wall.

Through her captivating gaze and the mysterious smile, Mona Lisa has been enchanting the public since it was painted in the early sixteenth century. I found that a bard who had lived in the Tamil nation, during the dawn of the new era gave somewhat a clear explanation for that captivating smile. The bard is none other than St. Thiruvalluvar. In the couplet # 1274, Thirukkural gives an explanation, which I find logical and applicable to the captivating smile of Mona Lisa.

Leonardo da Vinci was born , out of wedlock, to his parents, on 15th April 1452, at the Republic of Florence. He spent first five years his life with his mother, in the hamlet of Asciano. From 1457, he had moved to a small town called Vinci, to live with his father and his extended family of grandparents and uncle Francesco.

At the age of fourteen Leonardo was apprenticed by his father to famed artist at that time, Andrea del Vercocchio. Leonardo had eventually progressed to become a paid employee of Vercocchio’s studio. During this time, he helped Vercocchio paint, the Baptism of Christ, which was completed around 1475. It is said, according to Vasari, Vercocchio, upon seeing the beauty of the angel that his young pupil had painted, never painted again.

In the painting Mona Lisa, she sits with her arms crossed and with a softer smile and her gaze appears to pierce the viewer’s eyes. Many conclude this aesthetic attribute that has been mesmerizing visitors for centuries. The half hearted or even ambiguous nature of this smile makes the iconic painting more enigmatic, prompting viewers to wonder the mysterious mood of the muse and the thought of the painter.

Her gaze is another bewitching part of the composition. Many believe the inanimate painting’s eyes follow you across the room., making her an active participant when observed, rather than remaining an object to look upon. Interestingly the eye keeps following the spectator, had made to refer to the effect as ‘Mona Lisa effect’! The spectators tend to move around the room gazing at the painting. People also claim that the woman is always looking about fifteen degrees to your right, as if looking at your ear, and not your eyes. So much for the painting of Mona Lisa.

Watching this mesmerizing painting I was reminded of the great Tamil bard lived about two thousand years ago in south-India. Rev. U. G. Pope, the great Canadian Tamil scholar, who lived two centuries ago, on his translation of the book Thirukkural, in the introduction he mentions of Thiruvalluvar: he is the venerated sage and lawgiver of the Tamil people. Thirukkural is a collection of couplets with 1330 couplets on 133 different subjects. Unlike other proponents of ethics, Thiruvalluvar had thrown light in all aspects of life, and grouped them into three main groups. The first section of Thirukkural is Virtue, which comprises of 38 chapters, with of 380 couplets. The second group is about Wealth, and comprises of 70 chapters having 700 couplets. Finally, the third on Love which comprises of 25 chapters and 250 couplets on love and relationships.

On the chapter titled, ‘The reading of gestures’ couplet # 1274, is found in the third part, titled Love. I assume the scenario under which the sage had composed this particular couplet’ like this: A young lad casually mentions to the sage of a smiling dame from a distance while not uttering any words. The word ‘Pethai’ (பேதை) used in the couplet refers to the young lass which had been translated as damsel in English. The sage has described the smile as budding laugh (நகை) and not the full laughter. If it is a laugh it has to be construed as ridiculing of the person laughed at. He goes on to describe, there is a known secret in a budding flower. Meaning, we all know that the fragrance of a flower is trapped inside the bud, which cannot be smelt until it blooms. Similarly, he counsels the boy to realize that the smile reveals the secret of her love towards him, but the it is up to him to make the next move. Likewise, the soft smile on the face of Mona Lisa is the invitation to the millions of visitors to visit her to enjoy the complete painting, I guess.

As fragrance in the opening bud, some secret lies
Concealed in budding laugh of this dear damsel’s eyes.

Next time if you happen to go back to see the painting of Mona Lisa, please pay attention to this feature. I am sure you will appreciate the marvel behind this genius Leonardo da Vinci.

This article first appeared in the August 2021 print issue of Monsoon Journal.