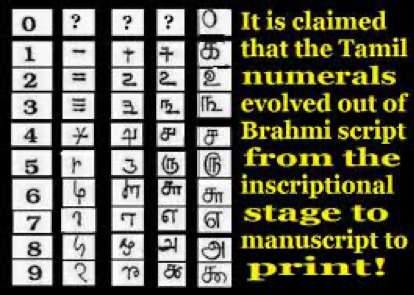 Recently, I chanced upon an article titled ‘Ancient numbers in the land of Ramanujan’, in the 29th December 2021 edition of ‘The Hindu’ daily. In the article, which I believe is an updated version of an earlier work by the scholar Iravadham Mahadevan, the writer traces the usage of numerals in ancient times and naturally, one cannot pass by the genius Tamilian Prof. Srinivasa Ramanujan (1909-1920), ‘the Man Who Knew Infinity’, from the Tamil country, when it comes to numbers.

In the article the writer claims that there isn’t much evidence available in the manuscripts though most of them were written many centuries ago on palm leaves which hardly lasted more than 200 years. Except for Tholkaappiyam (stanza #655.4 and Thirukural (#392), for example, where the usage of numerals are evidenced, almost all works of Tamil literature, have used words (ezhuththu) , as opposed to numerals, to describe numbers.

The twain that lore of numbers and of letters give
Are eyes, the wise declare, to all on earth that live

In essence, what the Kural says, the numbers (எண்) as well as letters (எழுத்து) are as important to all living beings, as that of their eyes.

Tholkaappiyam, which is much older than Thirukural in time, also mentions the usage of numerals in its stanza # 655.4, which I will revisit another time.

According to ‘The Hindu’, a recent discovery of a stone inscription from Thodur near Gingee in Villupuram district, which is believed to be from 3rd century C.E., features a numeral in Tamil-Brahmi (Fig. 1). In the inscription found in a cave, the numeral 3 inscribed at the end of a two-line verse, is represented by three horizontal parallel lines.

There was another evidence, an inscription, on a beautifully preserved pottery, which was unearthed from Alagankulam, in Rameswaram district. The well-preserved pottery inscription has only the numeral incised in fairly large size (Fig.2). This inscription is dated to the 1st or 2nd Century CE. The numeral, which is read from right to left, is transcribed as 408.

This gives you an idea of the evolution of the Tamil numerals from the Brahmi script through manuscript stage to the present print numerals. (Fig 3)

When Europeans colonized the Island of Sri Lanka, which was called Ceylon then, there was evidence of the use of numerals in that country too. This is known to be the last form of Tamil numerals before the usage was finally switched to Roman numerals by the colonizers. (Fig 4.)

After being ruled by Dutch and Portuguese, the island finally became a colony under the British empire.  During the time of Queen Victoria’s reign, ¼ Cent coins were in use (Fig 5) where 1/4 was represented by ‘வ’, a Tamil letter. The tradition of using Tamil letters to describe numerals continued during the Queen’s successor King George IV whence a coin with the denomination of 50 Cents was denoted as ‘ரு0’ சதம், here ‘ரு=5’ hence ‘ரு0=50 ‘ (50) Cents (Fig.6)

Just to be perspective, when I visited Mauritius, another island nation where Tamils live, in the year 2020, which was also colonized by the French, I found they still use Tamil numerals on their one hundred Dollar note. (Fig.8). On the bottom left corner, you can see the denomination ‘க00’. Here too ‘க’=1 hence ‘க00’=100.

One can only admire the courage of the leaders, no matter how big, small, powerful or weak a nation is, in preserving one’s tradition, especially an island nation like Mauritius, which is multi ethnic, multilingual and multi religious while still able to maintain eternal peace. Well done, Mauritius., you are the beacon to the world!

(Kumar Punithavel is a retired Civil Engineer lives in Canada. He writes to various publications and websites on Sangam literature and various other subjects such as ethics and traditions)