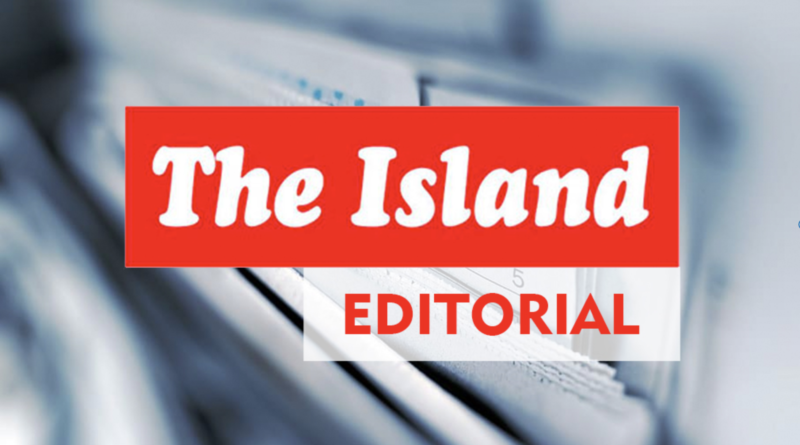 Winston Churchill derisively called the Soviet Union a riddle wrapped in a mystery inside an enigma. One may, with apologies to him, call the present-day Sri Lanka a paradox enveloped in an irony inside a muddle. What is happening in this country defies comprehension, and is even more puzzling than the Paradox of Rationality, or the so-called ‘rationality of irrationality’. Government leaders and the public behave as if they considered irrational behaviour rewarding, but sadly it is not so unlike in the game theory.

Port trade unions have embarked on a crusade against corruption and criminal waste of state resources. A noble mission indeed! But they are reported to have pinned their hopes on Minister of Port, Shipping and Aviation Nimal Siripala de Silva, of all people, and sought his intervention to have a probe conducted into waste and corruption at the Sri Lanka Ports Authority! Media reports on their request to Minister de Silva must have had the discerning public in stitches. One cannot but pity the port trade unions!

Sri Lanka’s electoral process is characterised by what may be called the circulation of rogues. One of the main campaign promises of the UNP-led Yahapalana coalition ahead of the 2015 presidential election was to probe the crooks in the Mahinda Rajapaksa administration, have them thrown behind bars and recover the stolen public funds. No sooner had the self-proclaimed crusaders against corruption been ensconced in power than they began putting crooked deals through themselves with their political enemies seeking power again purportedly to bring them to justice. ‘Cops’ became robbers, and vice versa, and, today, they have come together to safeguard their own interests!

The 2015 Treasury bond scams were one of the main reasons why the UNP-led Yahapalana government suffered crushing electoral defeats. They sealed the fate of that administration, whose end began in April 2018, when the UNP was trounced at the local government elections. They also enabled the SLPP to contest elections on an anti-corruption platform, and most of those who voted for it expected the bond racketeers to be brought to justice when it formed a government. But the SLPP has handed over the reins of government to the UNP, and those who went into hiding, fearing legal action over their questionable deals, are now crawling out of the woodwork.

The police claimed that former Central Bank Governor Arjuna Mahendran had changed his name and was hiding in Singapore, and therefore it was difficult for them to trace him. But he has written to this newspaper recently and revealed his residential address in Singapore! Will the Attorney General’s Department and the police take notice of this fact, and renew their efforts to have him extradited? This time around, he may come; those who protected him are in power, and certainly do not want to open a can of worms by throwing him to the wolves. Mahendran might emulate the likes of Basil Rajapaksa, who caused all court cases against him to collapse after the 2019 regime change.

The SJB will not dare take up the issue of bond scams because it has, among its MPs, some of those who stooped so low as to defend Mahendran during a COPE (Committee on Public Enterprises) investigation, and seek to dilute the committee report by having a slew of footnotes incorporated thereinto. But the SLPP dissidents’ silence on the issue is deafening. Have they also benefited from the largesse of the bond racketeers?

Singapore has a proud history of cracking down on the corrupt. Prime Minister Lee Kuan Yew did not relent in his efforts to rid Singapore of corruption even at the expense of his friends. Minister Teh Cheang Wan chose to take his own life when a bribery and corruption probe against him got underway in 1986 because he knew nobody in power would protect him. PM Yew, speaking of Minster Wan, subsequently, in Parliament, declared that the system must not be compromised. One can only hope that the present-day leaders of Singapore will fully cooperate with Sri Lanka, which is said to be seeking the extradition of Mahendran, a Singaporean, who has refused to stand trial over one of the biggest financial rackets here.

Meanwhile, trade union leaders should not be so naïve as to try to enlist the support of politicians to eliminate waste and corruption.